This all-time popular cake recipe post just got a whole lot better! Now updated with step-by-step photos, so whether you’re a novice or experienced baker, you can easily bake up and savour this incredibly rich , marvellously moist and super buttery cake.

Update! Dear readers, I hear you! You’ve been telling me how you all absolutely love the flavour of this cake, but would love to see how it’s really done. So, I’ve now included step-by-step photos, more detailed tips and instructions, which I hope will offer greater clarity and precision to your bakes. Which also means that this post just got a whole lot longer, but so much better, I promise! It’s so important to me that you can easily, confidently and successfully bake up this dreamy, rich and super moist butter cake. Skip right to the end of this post (just before the recipe) for my updates!

If you had to imagine how traditional Nonya butter cakes used to be in the past, this would have to be it. Very rich, very decadent, very moist, and very, very buttery. Just sweet enough, with the lightest hint of vanilla. So simple, so basic, but so delicious. How can anyone resist a slice?

This rich butter cake reminds me of the time during my college years, when I used to have these crazy cravings for really rich Asian-style butter cakes, the kind that you can get your fingers greasy, just by touching. I know! May not be heart-healthy, but certainly taste-worthy!

Living in Canada, I couldn’t exactly find any butter cake quite like it. Not even in the popular bakeries in Chinatown. Out of longing, I tried making my own from scratch. This was way before the era of the internet and the world wide web. Before I was able to afford my first recipe book. And when the only cooking shows I was even remotely aware of were ‘Wok with Yan’ and ‘The Martha Stewart Show’.

I was renting the basement of a house at the time, which had half a kitchenette and three little windows. Actually, they were more like half-windows, as my landlady’s lawn always seemed to grow faster than she could keep up with the mowing. I barely had more than one or two large mixing bowls (which I used for, err… everything) and a long wooden spoon that served as a paddle beater, whisk and spatula all rolled into one. It was a blessing that my landlady’s oven even worked!

Trying earnestly to recall how my father made his butter cakes, I had to ‘agak-agak’ (roughly estimate) all the ingredients. I had next-to-nothing for a recipe, save for sheer will and unfulfilled longing. Even when my amateur attempts were less than successful, but still perfectly edible, I was delighted that I could tuck into a slice of home-made butter cake. Every bite, morsel and crumb was savoured!

Now, getting back to this cake, this rich butter cake is reminiscent of the traditional Nonya tea cakes of older days, being a recipe of a Peranakan culinary matriach, the late Mrs Leong Yee Soo. It seems to have withstood the test of time, and remains a beloved classic that hasn’t lost its appeal, nor fallen out of favour.

A word of caution though, this is a indeed a very rich butter cake, with emphasis on ‘very rich‘! But it doesn’t mean that you shouldn’t try it, because you absolutely should! It really is a dreamy, delicious butter cake!

Just in case, I’ve included a reduced butter amount next to the original recipe amount, so you can make a choice between ‘rich’ or ‘very rich’. This recipe makes enough batter for one large 20-cm (8-inch) square cake or 2 loaf cakes, so halve the ingredients if you want a regular sized cake or one loaf. If you’d love to try your hand at a good butter cake, but don’t want it this rich, you can’t go wrong with a pound cake, or for a light take, try these fruit-filled, fruit-flavoured butter cakes, such as German apple cake, fig and cherry cake, or this tangy lemon raspberry cake.

UPDATE!  So, are you ready to make this all-time classic, incredibly rich and super moist butter cake together, step-by-step?

It’s really easy, and so rewarding. Let me show you how.

To start, have all your ingredients at room temperature. Now, depending on where you live, room temperature could be anything from a cool, even chilly, kitchen, where it’s 18°C inside, in the middle of winter somewhere in the Northern Hemisphere. Or it could be a searing hot and humid 33°C if you live near the Equator (like here in Singapore)! But for most intensive purposes, it is widely regarded as between 19°C to 21°C.

Chilled butter cuts and slices easily, so have it weighed and cubed once out of the chiller. It’ll probably need 20 to 25 minutes to come to room temperature, so you can go on to prep other ingredients. If you don’t have an instant-read thermometer, you can easily gauge when butter is ready for creaming by pressing your index finger lightly on its surface. The butter should give way slightly (you’ll see a slight indentation). It should feel cool to the touch, yet warm enough to spread. If it starts to get too soft before you’re ready to use it, pop it back into the chiller, but just long enough for it to firm up a little. Remember to take it out ahead of time, probably when you’re starting to whip up the egg whites.

Meanwhile, let’s get those eggs cracking…

If your eggs are chilled, this is when you’ll want to separate the whites and yolks – it’s a lot easier. Separate cleanly and carefully – do not let a single streak of yolk taint your egg whites or else, the whites will not whip up (yolk=fat=grease). On this note, it’s also very important that the mixer bowl you’ll be using to whip up your whites is dry and completely grease-free. Once separated, eggs should be allowed to come to room temperature before whipping. Cold eggs will take longer to whip, and also do not whip as well as eggs at room temperature (which means less trapped air bubbles = less volume = denser batter).

Next, weigh and sift flour and salt …twice, please.  Try sifting from a height a couple of inches above the bowl, to incorporate more air into the flour. If your salt is coarse, and it stays on your sifter, just tip it over into your sifted flour. In a small bowl, combine the extracts and brandy (optional). Separately, prepare the condensed milk.

Whip in the egg yolks…

Lightly beat yolks before adding to the whipped egg mixture. Reduce mixer speed to medium. Drizzle in the yolks, a little at a time, and whip until well incorporated. Continue to whip for 1 minute after all the yolks have been added. The whipped egg mixture should be quite thick and fluffy at this point, and tinged evenly to a pale cream colour.

Next, beat the butter….

Now, fit your mixer with the paddle attachment. In the cleaned mixer bowl, put in the butter (now at room temperature) and condensed milk. On medium speed, beat together, stopping occasionally to scrape down the sides and bottom of the bowl, until butter mixture turns a pale colour, and is light and fluffy (almost like whipped cream).

Then, add extracts and liquor (if using)…

Beat for 15 seconds to combine well.

At this point, pour in 1 cup of the whipped egg mixture and beat until well incorporated, about 30 seconds.

Here, you have two ways of going about this. If you are confident with your folding technique and ability, you can tip in all the flour, followed by the remaining egg mixture, altogether at once. I do it this way, as I feel that I can achieve a well-combined batter with fewer folds. Fewer folds will mean the batter will be less worked, and thus minimise the loss of trapped air bubbles that you’ve worked hard to whip up. I know it will seem like an enormous exercise to fold all that whipped egg mixture together with the flour, but you might just be surprised how manageable this batter becomes. Be sure to fold until the batter appears homogeneous and is even in consistency.

Alternatively, you could fold in the flour mixture and the remaining egg mixture in 2 batches, alternating between the two. Keep your folding as light and gentle as possible, folding until batter is well combined and smooth. Your batter will feel a little heavy at this final stage, but is of pourable consistency, and can be tipped out into the greased pan.

Once the batter is poured into the greased pan, spread the batter to cover all the corners of the pan, and level the surface evenly. Give the cake pan a few gentle taps on the counter, to get rid of air pockets. Bake on an oven rack placed in the centre of the oven, for 10 mins at 175°C, then reduce oven temp to 135°C and continue to bake for another 1 hour to 1 hr 15 mins, or until done.

This cake enjoys a slow, long bake (it is a pretty big cake, after all!) so do not be tempted to remove the cake until you’ve checked thoroughly for doneness.

The baking times suggested here are guidelines, as each oven behaves differently. In fact, I recently replaced my old oven with a brand new one, and it seems to take me at least 20 minutes longer to bake this exact same recipe.  So I usually use a couple of methods to assess when a cake is done baking. Using your sight, check to see if the cake surface has browned evenly to a deep golden brown, the centre of the cake has fully risen, and the cake has shrunk from the sides of the pan. Next, using your fingertips, press lightly in the centre of the cake – it is done if it feels firm to the touch and springs back. Finally, insert a bamboo or metal skewer in the centre of the cake – the cake is done if it emerges free of sticky batter. 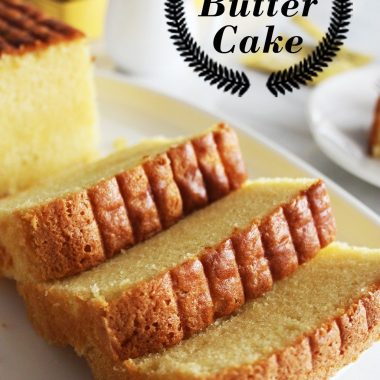 Did you make this? Share it on Instagram!I'd love to see! Don't forget to mention @foodelicacy or tag #foodelicacy so we can drool with you!

This site uses Akismet to reduce spam. Learn how your comment data is processed.

Hi, I'm Celia and I'm the gal behind this small space that I think is my little piece of heaven on earth. When I'm not outdoors doing my favourite activity - hiking - I'm in my kitchen, cooking! Here are my easy, everyday, Asian recipes and quick, sweet bakes anyone can create.

This site uses cookies to enhance your browsing experience. You can find out more here.