This is every home baker’s must-have recipe for moist and buttery pound cake! Decadently rich and deliciously sweet, this pound cake is a must-try for all you butter cake lovers.

I felt wickedly guilty making this pound cake today. As I was weighing out the butter, sugar and eggs, I couldn’t help thinking that there’s tub-loads here. Enough to possibly clog my arteries for good.

And dare I say, turn me into a diabetic overnight? Seriously, this is sinfully good on so many levels, I don’t know where to begin.

Can I just say, a pound cake is not for the faint of heart or the health-conscious? But what am I to do?

When devouring a slice or two of this moist and buttery confection makes me feel insanely happy and inexplicably contented!

A love affair with pound cake

I’ll never forget my first taste. It came in a chilled loaf box packaged under the Sara Lee brand. Yes, you remember too right? This cake, as well as Sara Lee carrot cake and chocolate cake were my favourites!

I grew up in a very small country on the island of Borneo. Back then, we’re talking in the 70’s, imported foods especially from Europe and the US were not easy to come by.

So, you can imagine how having Sara Lee cake products stocked in our local supermarkets would be considered a dream!

Not only had I never tasted pound cake, but I most certainly never had chilled cake in my life. Somehow, it was the most unusual but amazingly delicious slice I ever had then.

I was very young, so it didn’t take much to impress me. Especially when stuff comes in a sweet form like cake!

Nonetheless, the flavour of that pound cake, and the name behind it, Sara Lee, was indelibly imprinted into my consciousness. In fact, I was so taken by this cake as a little girl that I used to wonder who ‘Sara Lee’ really was?

I felt so compelled to write to ‘her’ to say how much I loved her cake! Well, I also had an ulterior motive as a kid.

I wanted to ask please, could my sister have the recipe so that she could make it for me whenever I wanted some? Ah yes… the musings of an 8-year old me, no less.

A pound cake is a butter cake too!

So what makes a pound cake so unique? Isn’t it a butter cake after all? Well, in a simple answer, yes. But with the butter factor bumped up a couple of notches.

The original recipe first appeared in English and American cookbooks in the 18th century. It called for one pound each of flour, butter, sugar and eggs. Think of it as having equal parts of each of these ingredients.

So let’s say if you didn’t have any recipe and wanted to start with 1 cup of butter (227 grams), here’s what you need to make a pound cake:

This, as you can see, would be sticking to the ratio almost perfectly. However, the recipe I’m sharing here varies a bit. It’s old school in that it starts out with almost equal quantities of butter and sugar. But notably, it has much less flour and a lot more eggs.

All this simply means is that this pound cake is super buttery, sweet and moist!

Some sources claim that the pound cake originated in northern Europe. It is believed that the original recipe was brought to America from England during the 1700’s.

A recipe for pound cake made its first appearance in the U.S. cookbook titled American Cookery, which was published in 1796. By most accounts, the pound cake was the source and inspiration for the American butter cake.

But much more than the average butter cake, pound cakes have a firm but light crumb. Also, these cakes are super moist and rich with pure buttery flavour.

Over time, the modest pound cake has evolved and its ingredients too have changed. This meant that the texture and flavour too have altered significantly, with many variations influenced by cultural aspects.

Popular versions incorporate the juices of lemons and oranges, as well as flavour extracts like vanilla and almond.

Nowadays, to satisfy every possible craving, there are delicious chocolate ones, cranberry pound cakes, as well as cream cheese. Just endless possibilities!

About this vanilla pound cake

My favourite versions of pound cake are the traditional ones flavoured simply with vanilla. Or, when I’m craving for one with subtle hints of a light, tangy flavour, infused with lemony notes.

What about you? Have yet to make your first pound cake? Well, I’ve got just the perfect recipe for you!

This recipe for a classic pound cake was written by the late Mrs Leong Yee Soo in her cookbook, ‘The Best of Singapore Cooking‘.

Her cake recipes are truly some of the best I’ve made. And by sharing them here, I can be confident that you’re getting a true, tried and tested recipe.

Enjoy your pound cake warm, chilled, or (and this may surprise you somewhat), slightly toasted and spread with even more butter!

Here are more awesome buttery treats to inspire your next bake:

All nutritional values are approximate only. 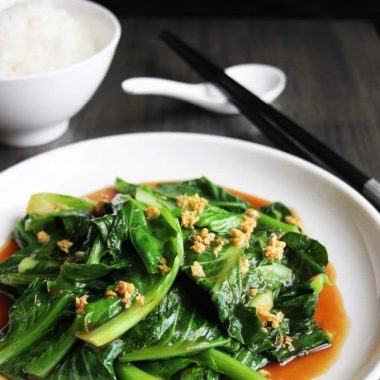 Get the Latest Recipes

Get the Latest Recipes!

Don't miss our delicious recipes and updates in your inbox!

This site uses cookies to ensure that you get the best possible experience here. If you continue, we'll assume you're okay with it.Got It!Our Privacy Policy